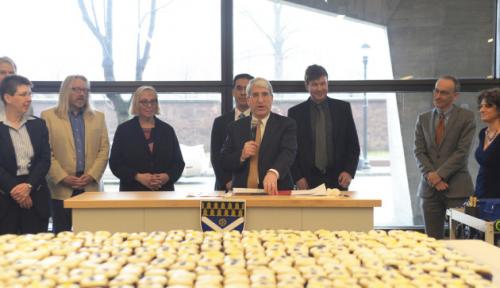 This article has been updated to reflect the version that appeared in print on March 27.

Thursday afternoon found hundreds of students and faculty celebrating in the Center for Engineering, Innovation and Design with “byte size” cupcakes frosted with binary code. These cupcakes were, in fact, pieces of “wedding cake,” symbolizing the new union between the Yale Computer Science Department and the Yale School of Engineering and Applied Sciences.

The move comes along with two anonymous donations, totaling $20 million, that will provide the Computer Science Department with five new faculty positions, increasing the department’s size by roughly 25 percent. These donations — officially given to the School of Engineering and Applied Sciences, which absorbed the CS Department as of noon on Thursday — may solve problems that have plagued the department for years, said administrators, students and faculty at the event.

“It’s thrilling for me to feel like Yale is taking these important steps to having the caliber of Computer Science Department that all of us feel Yale deserves,” Dean of the Faculty of Arts and Sciences Tamar Gendler said.

Although most major universities, including peer institutions like Harvard and Princeton, house their computer science departments within their respective schools of engineering, computer science at Yale was previously separate from the SEAS within the Faculty of Arts and Sciences.

According to Computer Science chair Joan Feigenbaum, of the five new faculty, two will be senior and three will be junior. The two senior faculty will be jointly appointed in other engineering departments in the SEAS. Besides the move into the SEAS and growth in faculty size, there will be no major, short-term changes in the department’s day-to-day operations, said Feigenbaum.

Gendler said that since she became dean of the FAS in July 2014, she has been working to acquire donations from alumni and other interested parties to help increase the size of the Computer Science Department. By early fall, the administration had a basic outline and strategy for acquiring potential donors. By December, the administration had fully consulted with all relevant parties concerned, including donors and computer science and SEAS faculty.

According to Dean of the SEAS T. Kyle Vanderlick, the donation and subsequent agreements were not in response to student outcry — including two petitions circulated by graduate and undergraduate students demanding a radical increase in the size of the Computer Science Department. She said she had been working with Gendler and University President Peter Salovey since July 2014.

At the time the petitions were filed, the University was unable to publicly announce that it was in the process of securing the donation, Gendler said.

“It [was] frustrating for me to see the kinds of concerns that have been expressed by people about the department and its future when I knew, though I was held to confidence on it, that we were and had been for months and months and months taking concrete steps in exactly that direction,” Gendler said.

Salovey, who spoke at the ceremony, also announced that Yale will immediately begin work on an underground teaching concourse that physically links the CS Department, housed in Arthur K. Watson Hall, with other main engineering buildings on campus.

According to the Yale News press release, the 10,000-square-foot space will be designed specifically for undergraduate engineering laboratories.

Moving the department into the SEAS will give it access to resources that are specific to the school, Gendler said. Some of those resources come from prior donations, from which the department will now be able to benefit.

From 2011 to 2013, SEAS made nine new hires in junior faculty across various departments. This recent slew of hires, who have all started at Yale within the past two years, comprise a nearly 20 percent increase in faculty at the school, which grew from 50 to 59 full, associate and assistant faculty members.

Part of that increase in faculty size was made possible by a March 2011 $50 million donation from John Malone ’63, which endowed 10 professorships across SEAS.

In a Tuesday email to the News, Vanderlick said she was “thrilled” about the donation and welcoming the Computer Science Department into the engineering school.

“I believe this alliance will make both CS and the Engineering departments stronger, and better able to compete for the best students and faculty,” she said, adding that there is an “especially close synergy between computer science and engineering.”

But even before the recent donation, the Computer Science and Engineering Departments have collaborated for years. Faculty and administrators agreed this prior collaboration makes the move a natural transition. There are currently six computer science professors cross-listed as professors in other engineering departments.

Spielman, who is also the co-director of the Yale Institute for Network Science, where he works alongside four electrical engineers, called himself a big proponent of the move.

“My perspective of CS is that we are somewhat of a cross between engineering and mathematics,” Spielman said. “Much of what we are trying to do is design new things or find better ways of designing and building which are properly engineering activities.”

Even though there will be no changes in the department’s day-to-day operations, the computer science faculty, alongside their new engineering colleagues, may consider making adjustments to graduate student admissions and the physical locations of faculty on campus. In addition, they might discuss offering more joint courses with the engineering departments as a result of the move, she added.

Feigenbaum said that these changes, if they were to take place, would occur after multiple discussions and a period of settling in. It will take a “long time to hammer out details,” she added.

Discussions regarding the searches for the two senior joint faculty positions will start immediately. But the full extent of promised growth may take several years to achieve, Feigenbaum said.

Even before the anonymous donation was announced, the department had been looking for a junior faculty member to replace computer science professor Bryan Ford, who announced in the fall that he will be leaving Yale to join the Swiss Federal Institute of Technology in Lausanne at the end of June. Now, thanks to the donation, it is possible that the Computer Science Department will hire two new junior faculty members by the end of the year, she said.

Moreover, the department is currently engaged in a targeted recruiting effort, aimed at a acquiring distinguished senior researcher in the field of online privacy. With that, the five new positions and the Ford replacement, the department may see seven new hires over the next few years, Feigenbaum added.

Gendler confirmed that the faculty is currently performing a junior faculty search and a targeted search. She added that the department has already been preapproved for three searches next year. The final two searches will take place in the following years, she said.

But conducting an authorized faculty search does not necessarily mean those new faculty members will be hired immediately, said Gendler and other computer science faculty members interviewed.

And faculty searches themselves take time, computer science professor Brian Scassellati said. Even at Harvard, which just received an estimated $60 million donation from former Microsoft CEO Steve Ballmer to increase the size of their computer science department by 50 percent, growth will take time.

Despite a failed faculty search — when a weaker applicant pool meant no hires — several years ago, Fischer said he felt optimistic about this year’s round of searches.

“This time I think the candidate pool is considerably stronger than the last time,” he said.

Feigenbaum said the short-term growth in department size will alleviate many of the issues CS has been facing over the past five years. The new hires will give the department the opportunity to offer more courses for both graduate and undergraduate students. The department will also now “have more robust coverage in terms of specialization.”

Currently, many of the specific CS fields, such as networking and robotics, only have one professor specializing in the field.  If the sole professor were to go on sabbatical or leave the University, those courses would be left with no one to teach them.

What may be even more exciting for students is that the department now has the opportunity to expand into newer CS areas like applied machine learning, Feigenbaum said. Although the department has traditionally been strong in the theory of machine learning, it has not been active in machine-learning applications, which are some of the most important technological developments of recent years.

“I am absolutely delighted this is happening,” Feigenbaum said. “We definitely need to do this, but I want to sound a bit of a cautionary note that this is not all we need to do. This is a first step, but after we take this step Yale will still have a fairly small CS department.”

Even with the five new professorships, the CS Department will not be active in all areas of computer science, especially newer areas, Feigenbaum noted. Other professors echoed this concern, explaining that even these new hires will not provide enough positions to cover all of CS’s many fields and specialties.

“We are thrilled to get more faculty members, but the number of new slots is much smaller than what we need to catch up with a lot of other departments,” computer science professor Holly Rushmeier said.

Rushmeier added the department is particularly in need of additional faculty in human computer interaction and natural language processing. Computer science professor Daniel Abadi said he would like to see the department hire someone well versed in computing systems and architecture.

Abadi also said the two joint senior positions in SEAS have as much potential to fill holes in the department as the three hires solely devoted to CS, given the substantial interdisciplinarity of the fields.

“I’m very excited — the potential for this is really quite great,” Yale College Dean Jonathan Holloway said. “Is it enough? I just don’t know. I don’t think any of us thinks this is the end of the story when it comes to size and scope of CS at Yale.”

Gendler said she “absolutely” sees this recent change as a stepping stone for the CS Department and a sign that there could be even further growth for the department in the future.

“This is a great first step in the right direction,” said Feigenbaum. “Now Yale’s administration and its famously generous alumni must ensure that it’s not a last step.  To be a world-leading university in the 21st century, Yale needs a world-leading CS Department, and that means a lot more growth.”